Main
About the region
Infrastructure

In Akmola region all telephone lines are transferred to digital telephone exchanges.

At the same time, the volume of Internet services for wired and wireless telecommunications networks increased by 5.7%, for the distribution of cable infrastructure programs, wireless networks and satellite via networks - by 12.1%, for equipment rental services - by 14.3% .

Transport plays a key role in the socio-economic development of the region. The geographical location of the region, proximity to the capital, as well as the location at the intersection of large transport corridors provide a high transport potential of the region. 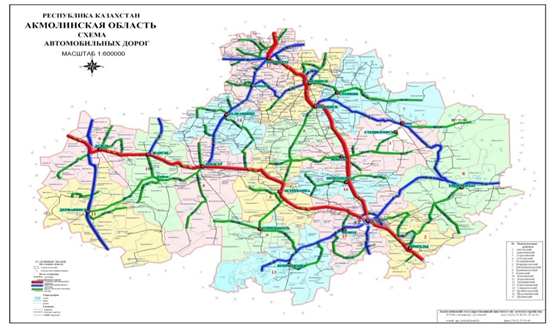 On the territory of Akmola region passenger carriage by road is carried out on 212 regular routes, of which 63 are intracity (intra-village), 31 are suburban, 59 are inter-district (inter-regional long-distance), 33 are intra-regional, 19 are inter-regional and 7 are international routes.

Currently, out of 521 settlements with a population of more than 100 people, 412 settlements are covered by bus service (from the beginning of the year, 5 settlements in 1 Zherendinsky district and 4 in Tselinogradsky district) are 79.1% (or 20.9%) ).

The region has a developed railway network. Four branches of the railways pass through the city of Kokshetau. The region has the highest railway density in the country - 10.66 km per 1000 sq. Km. km of territory (average for the Republic of Kazakhstan - 5.53).

The operating length of public rail tracks in the Akmola region in 2016 was 1,513 km.

Kokshetau Airport has the status of an international airport and complies with all international requirements and ICAO Category 1.